Pakistan is largely based on agriculture; it contributes about 25% to the national economy, provides employment for over 50% of the labour force and is main source of income generation in rural areas. During last four years 2002-06, average annual growth in agriculture sector has been frustrating due to low production of the main crops.

In most of developing countries farmers have always sought ways to increase crop productivity, quality, and sustain reliability through out the year; nearly all farming in the developing world remains small scale and labor intensive and employs a much greater proportion of the population as a result of it there is less reliable productivity and growth; on the other hand agriculture has become more mechanized and less labor intensive with few people engaged in food production in many advance countries due to adoption of up-to-the-minute technology; they have successfully maintain sustainable development and are more certain about their food and energy security. 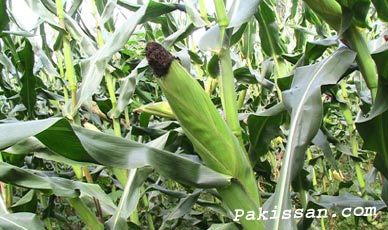 Green revolution in the 20th century did not harness Pakistan and the average yields of crops are still low as compared to other countries- the yield of major crops is still 30-50 per cent below the demonstrated potential – the gap between actual and potential yield of rice is 50 per cent, wheat 40 per cent, sugarcane 35 per cent and maize 30 per cent. Moreover the burgeoning population having already crossed the 160 millions mark, so elevation of food insecurity and poverty continue to be the main concern of the country. On current trends in population and food production there is likely to be a large gap between production and demand by 2025.

The goals of farmers, government institutes everywhere remain the same how to increase agriculture out put, reduce hunger and poverty with environmental friendly technologies; there is no single solution which is likely to solve our growing problem in agriculture, food, energy, health and environment however tools of agricultural biotechnology are being adopted in many countries to address these issues. It is worth mentioning today around 45 million people in Pakistan has not enough income to purchase the food they need for healthy life and about one third of the population is malnourished; improvement in agriculture will not only help country’s economic growth but also benefit a large segment of the population.

Maize crop has a variety of uses it is grown basically for grains and is at the same time a popular fodder for livestock, its grain is a rich source of starch, protein, edible oil is extracted from maize seeds, biofuel like ethanol, biodiesel are being obtained from maize in many parts of the world and it has many applications in food and Pharmaceutical industry.

Maize stem borer is major insect problem in Pakistan, which on the average reduces the yield by about 20-40%; similarly weeds in maize crops reduce yield by 30-45 per cent or even more. Many farmers perceive that insecticides have limited effectiveness on stem borer larvae on the surface of maize plants at the time of spraying but are less effective against larvae that have bored into stalks. Furthermore egg laying can occur over a three week period and most insecticides are only effective for 7 to 10 days; as result the cost per treatment is turned very high relative to perceived usefulness. It is worth mentioning that since the adoption of hybrid maize varieties the production capacity per acre has increased significantly which is more than 5 tones grains per acre as compare with 1.5 tones per acres with conventional maize varieties.

Plant biotechnologists claim that this problem can be solved by the adoption of Bt Maize or genetically modified (GM) maize; which is genetically enhanced by inserting Cry1Ab gene from naturally occurring soil bacteria Bacillus thuringiensis (Bt) into the genetic makeup of the corn plant, this genetically improved maize produces the a toxic protein which has the ability to control certain maize borers and a few maize rootworms. GM maize plant does not need to be sprayed as compare to conventional maize varieties so the risk to the environment is minimal as well as it reduces number of pesticides application however opponent argue that the way the crop is grown in some countries may lead to insects becoming resistant to the GM plant. Similarly GM maize with herbicide tolerant gene has the inbuilt mechanism against the application of non selective herbicide; Glyphosate, is consider the most important herbicide around the world. Since transgenic, glyphosate-resistant crops were introduced in 1996; adoption of this technology especially in the U.S. and South America has been increased dramatically.

Today out of 365.7 millions acres of total global maize grown area; Bt maize have been cultivated on 62.2 millions of acres representing 17% of global transgenic; Bt maize has been approved to grow commercially across nine countries the United States, Argentina, Canada, South Africa, Spain, the Philippines, Uruguay, Honduras and Germany. The Philippines was the first country in Asia to commercially introduce the cultivation of Bt maize in 2003. France resumed the planting of Bt maize in 2005 after a four-year gap having planted Bt maize in 1998; because members of French Maize Growers Association expressed their open support for biotechnology, this year 54,362 acres of area; which is 1.5 percent of France’s cultivated maize land – have been sown with GM maize however farmers have urged greater use of GMO crops to boost yields. The underlying concern expressed by the maize growers fear that France would lagging behind in biotech crops when countries like China and India were embracing the technology to their advantage.

More recently French President Nicolas Sarkozy said no GM crops would be planted in France until the government had received the results of an evaluation by a new authority on GMOs set to be launched this year on the other hand European Agriculture Commissioner said a full ban on GMO crops would clearly go against the rules and that France would lose in court if it implemented such a ban. Today seven countries in EU are plantings of Bt maize; according to reports the crops have been delivering income gains to the farmers planting the crops, health benefits for the human and livestock consumers from improved grain quality and environmental gains associated with lower insecticide use.

However many claim that ecological effects of Bt maize on non-target need to be monitor and evaluate; as a precautionary in many countries Bt maize must be cultivated alongside so called “refuges” of conventional varieties – a strategy aimed at preventing the insects from becoming resistant to Bt.

According to a PG Economics study “The benefits of adopting genetically modified, insect resistant (Bt) maize in the EU: first results from 1998-2006 plantings”. The result shows that:

1. In maize growing regions affected by European Corn Borer (ECB) and Maize Stem Borer (MSB), the main impact of growing Bt maize has been higher yields compared to conventional non-GM maize. Average yield benefits have often been over 10% and sometimes higher;
2. In 2006, users of Bt maize have, on average, earned additional income levels of between Rs. 2,183 and Rs. 4,736 per acre. This is equal to an improvement in profitability of 12 to 20%;
3. In certain regions, Bt maize has delivered important improvements in grain quality through significant reductions in the levels of mycotoxins found in the grain. This delivers a health benefit to the livestock sector that mostly consumes the maize;
4. Where farmers have previously used insecticides to control ECB and MSB, adoption of Bt technology has delivered environmental gains from less insecticide use and reduced use of fuel. Reduced fuel use is contributing to lowering carbon emissions.

At present herbicide and insect-resistant maize are permitted for food use and traded on the international food and feed markets; under certain biosafety regulatory framework. However oil extracted from Bt maize grains can be marketed in any country as there is no Bt protein in refined edible oils. Bt protein is separated out in the oil extraction and refining process as oil consists of fatty acids.

Since 1996, when the first commercial GM crops were grown, the global GM crop area has unprecedented increase- reflecting grower satisfaction due to the significant and multiple benefits of GM crops; which include – more sustainable and resource efficient crop management practices that require less fuel, conserve vital soil moisture and control erosion; less dependency on pesticides. It is worth mentioning that there is not a single scientific evidence of its negative impact on environment and human health.

Subject of Mycotoxins in food / feed have received considerable attention especially over the last three decades around the globe – according to some reports Bt maize contains on average 90 percent less cancer causing mycotoxins than the non-GM maize varieties grown by organic and traditional farmers. Because the fungi that produce the mycotoxins, Fusarium molds, enter maize plants primarily through holes produced by corn borers; as every cell in Bt maize is equipped to fight corn borers directly, corn borers that attack such plants are quickly killed and do not replicate, which results in a fewer Fusarium infections and reduced mycotoxin production.

Despite the fact that Pakistan is overwhelmingly an agrarian economy, it is unable to produce sufficient edible oil for its domestic requirements therefore substantial amount of foreign exchange is spent on the import of soybeans, canola and palm oil. Our total requirement of edible oil is estimated at 1.65 million tons against the domestic production of various types of edible oil; which is around 600 thousand tons annually and, therefore, the shortfall of about 900 thousand tons is met through imports. By venturing into biotech crops like Bt maize, Bt soybean Bt Canola; Pakistan will be able to deal with this issue as well.

Pakistan is experiencing skyrocketing prices of edible oils, ghee and sugar since countries growing large area under soybean, maize and sugarcane started programs to convert these crops into biofuels due to increase in crude oil price per barrel (US$ 80 plus) in the international market; as a result of high demand the price of these crops have jumped many times. More recently a senior United Nations expert has condemned the growing use of crops to produce just “biofuels” as a replacement for petrol as a crime against humanity because it push the price of some food crops to record levels.

In order to save an average outflow of foreign exchange of about $900 million on account of import of edible oil and food & energy security, there is a strong need to accelerate efforts in the agriculture sector to steadily increase the local production of oil seeds by the use of GM crops.

Fortunately Pakistan has state of the art research institutes like National Institute for Biotechnology and Genetic Engineering (NIBGE), Nuclear Institute of Agriculture and Biology (NIAB) and National Center of Excellence in Molecular Biology (NCEMB); which have capacity to provide GM seeds to the farmers in order to conquer the future growing challenges in agriculture however government’s well and priority would determine the direction.

Collectively, biotech benefits offer growers and society more efficient and higher crop productivity that help contribute to a more sustainable agriculture and to the formidable challenge of ensuring global food, feed, fiber and energy security in the future.

Meanwhile Pakistan need to strengthen its IPRs; Plant breeders Rights; and amend Seed Act as soon as possible to attract investment in this sector. Adopting crop biotechnology can bridge up the gap between the realized and potential maize yields; however it is vital to know so far this emerging technology as it has more advantages than disadvantages.

Why Growing Old Is Better Than You Think

Witness Technological History in the Making

The 5 Most Influential People In The World

The 5 Most Incredible Body Transformations