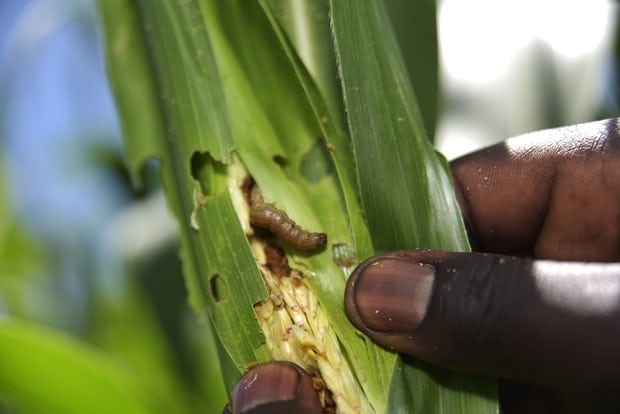 The crops that 200 million people rely on in Africa are under threat from a caterpillar that is spreading throughout the continent, agriculture experts have warned.

Urgent action needs to be taken to stop the fall armyworm’s destructive march across the continent.

Three winners of the World Food prize made the warnings after the publication of a report that said armyworms, or spodoptera frugiperda, could cost 12 African countries $6bn (£4.6bn) a year in lost crops unless they are contained.

Originally from the Americas, the caterpillars eat maize, a staple in many African countries. So far, they have been found in 28 African nations – 16 more than they were detected in five months ago. If nothing is done, they could eat between 20% and 50% of the maize produced in 12 of Africa’s maize-producing countries, the report warned, and are likely to spread even further through sub-Saharan Africa. In May, Ghana declared a state of emergency in response to the invasion.

“The armyworm is a clear and present danger,” said Akinwumi Adesina, president of the African Development Bank and this year’s World Food prizewinner. “Doing nothing is not an option. What we need are urgent actions to support Africa, to rapidly address this real threat to its food security.”

Pedro Sanchez, a soil scientist at the University of Florida, agreed. “Stopping the armyworm is the highest purpose to which we can dedicate this year’s Borlaug dialogue,” he said, referring to the controversial American agronomist Norman Borlaug. “We hope to galvanise those with resources and expertise to rush to the aid of those in need.”

Robert Fraley, a Monsanto executive and 2013 World Food laureate, pointed out that a great deal is known about how to address the threat as it has long been in North America, where scientists and producers have mostly been successful in containing it.

“The good news is that this threat is eminently preventable. We have strategies to detect the insect early, to stop its spread, and to identify crop varieties most resistant to it,” he said. “The world’s anti-hunger community needs to invest the resources to put those tools to use.”

Africa has long had its own type of armyworms to deal with – spodoptera exempta – but fall armyworms are only known to have been in the continent since January 2016, when they were discovered in Nigeria.

African armyworms were bad enough, eating mainly maize and other cereals, but fall armyworms are worse as they have a voracious appetite for many other crops too, including beans and vegetables – and reproduce at a very fast rate. The moth can fly 100km in one night.

They thrive in a climate where drought is followed by heavy rains – a pattern that climate change has greatly intensified in Africa.

Pesticides are used against them in Brazil, but the UN Food and Agriculture Organisation has warned against this in Africa. It is partly because of the risk of poisoning the environment, and because the caterpillars may be developing resistance to the pesticides. Scientists are working on biopesticides, such as viruses that naturally attack the armyworms, but the process of developing and registering these is long and costly.

Do Pesticides Get Into the Flesh of Fruits and Vegetables?

Swimming the Crystal Waters of the Blue Lagoon

Why Do Women Cope With Stress Better than Men

Witness Technological History in the Making

The 5 Most Influential People In The World

The 5 Most Incredible Body Transformations